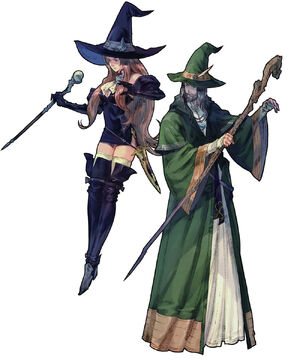 "A magic-user who casts spells to damage, weaken, and strengthen others. Low defense makes them poor in close-quarters combat."

The Wizard is the first mage class available across various species. Wizards start off weak but gain power toward the end of the game. They can offer useful utility spells and debilitate tougher units until you can deal with them, such as Dragons, while eventually becoming a formidable attacker in their own right. It is beneficial to select one primary element to utilize, while you level up the appropriate Augment Element skill throughout the unit's career, otherwise offensive potential will taper off in the late game. They are worth keeping in your party until another more powerful mage class is available. Their Meditate skill is an important skill to transfer to other magic classes.

Can be Used by: Human, Winged, Lamia, Orc, Skeleton & Ghost.

Retrieved from "https://tacticsogre.fandom.com/wiki/Wizard?oldid=6995"
Community content is available under CC-BY-SA unless otherwise noted.