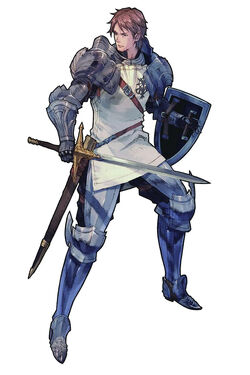 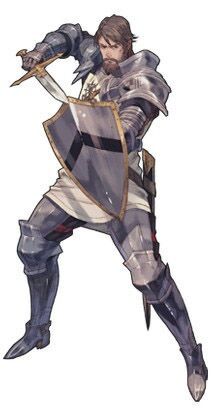 "Only knight's commanders are granted the title of white knight. In both defense and offense they are far superior to common knights."

This class is an upgraded version of the Knight but is weaker than a Knight in defence. Has a powerful ability to speed up allies while still being able to also attack in the same turn. Paralysis Blade is also useful, as it is a guaranteed 'Stun' effect (unless Stunproof), lasts for a few turns, and can affect many enemies in counterattack too. Taking damage does speed up TP accumulation, for which White Knights have various uses. It is however quite a slow class, which is further compounded when using 'Velocity Shift' on allies meaning that White Knights often fall behind in combat. They have an interesting selection of weapons, spells & skills dropping the Knight's 'Lightguard' and 'Instill Light' for more status and healing spells. The class is overall well-balanced.

How to Unlock: Receive 5 Classmarks upon recruiting Gildas and/or Mirdyn (depending on Chapter Route).

Retrieved from "https://tacticsogre.fandom.com/wiki/White_Knight?oldid=7070"
Community content is available under CC-BY-SA unless otherwise noted.