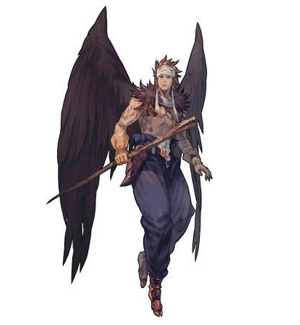 "A winged warrior with a light step on the battlefield. Excellent at both melee and ranged attacks"

The Vartan exhibits a number of obvious advantages off the bat, such as high movement, flight and is adept at both melee and ranged combat. As a flyer the Vartan can fly up high to gain an elevation advantage and shoot much farther than normal with Bows, a powerful ability indeed. This class gets two unique abilities, with 'El Colas Winds' being the more useful of the two - it grants the Vartan and nearby allies 'Air-touched' and 'Truestrike', adding extra damage and accuracy to their attacks. Sadly, at very high levels one-handed bows cease to upgrade, a concern that drives many players to resorting to crossbows for this class, or simply abandoning it completely. While this is reasonably effective, this wastes many of the Vartan's best features such as flight and flexibility. This class has as main downside that it's very slow if it moves too far. The cost in RT per square moved is 6, the single highest cost of any class. If used primarily as ranged attacker, it can stay still most of the time, and avoid the penalty.

Can be Used by: Winged Units.

How to Unlock: Rare drop from Winged Units, more commonly in Chapters 1 and 2.

Retrieved from "https://tacticsogre.fandom.com/wiki/Vartan?oldid=5495"
Community content is available under CC-BY-SA unless otherwise noted.