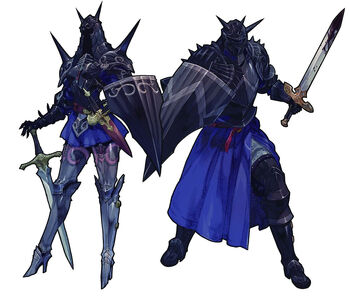 "The howls of tormented spirits can be heard with every step of the terror knight's boots. Skilled in weakening enemy attacks and defense, they function as a wall to enemy advance."

This class has access to Dark Magic debuffs, and can inflict Fear on multiple units, which weakens both an opponent's attack and defense (although finishers are unaffected). It is the slowest class by weight, which means they fall behind in combat a little, but as they favour 2-Handed weapons this can balance the weight difference of a weapon + shield. Their access to Drain-type spells gives them the ability to steal enemies' HP, MP or TP. 'The Headsman ' and Ogre Blade are their best weapon options, despite the poor performance of 2-handed Swords on most classes. The Dark Headsman offers +2 to the Lament of the Dead skill rank, significantly raising success chances and Ogre set has a useful magic boost.

Can be Used by: Humans, Orc, Skeleton

Retrieved from "https://tacticsogre.fandom.com/wiki/Terror_Knight?oldid=7140"
Community content is available under CC-BY-SA unless otherwise noted.