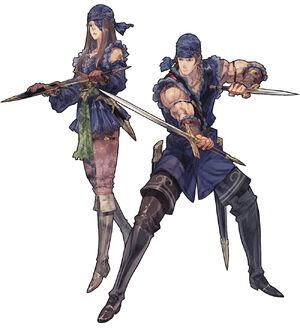 "Deadly dexterous warriors who's also capable of relieving enemies of their treasured goods and laying traps to snare the unwary."

This is the most useful generic class in the game, excelling in speed, damage output, utility and versatility all at the same time. They are one of the most fragile classes in the game, even though they can equip the higher end shields, this makes them rely heavily on evasion for survival, making melee dangerous at the start. Their ability to Steal from enemies opens up a whole new resource of rare items and classmarks.

Their Sneak Attack and Sparagmos abilities are powerful, but most of all they are one of the fastest units in the game, because their cost of movement is so low: Only 3RT/square, compared to the 4 or 5 of most classes. Speedstar makes them even faster, allowing them to get many turns in. Since Sneak attack only works with melee, Fists and Daggers are their best weapon options

They have access to 4 Familiar skills, but only Fairies and Imps share both classes - Agonal Scream and Lingering Kiss are two skills worth the effort, however.

Can be Used by: Humans, Faeries and Imps

How to Unlock: Classmarks dropped/stolen from Rogue units, can be bought from Deneb's Shop (Chapter 4 and CODA only)

Retrieved from "https://tacticsogre.fandom.com/wiki/Rogue?oldid=5489"
Community content is available under CC-BY-SA unless otherwise noted.