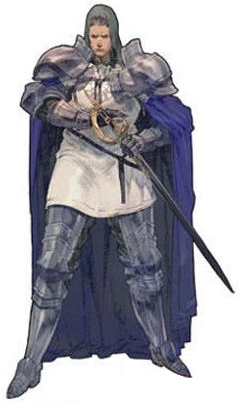 "A knight among knights, recognized by the king himself. Highly skilled in defence as well as attack."

This class is a Knight variant, enjoying many of the same benefits while it has access to a much wider range of weapons, and uses much more utility magic. It trades Instill Light for Consecrate Edge. The Paladin tanks damage about as well as the White Knight, but it does get Phalanx unlike the White Knight, and granting itself Light-touched means its a better damage dealer than both the Knight and White Knight. Unfortunately the game is nearly done by the time you get access to the Paladin class, but you will likely be impressed with him if you take the time to play around with the class.

Can be Used by: Lanselot only

How to Unlock: Classmarks can be bought from Deneb's Shop after Episode 3 of Coda.

Retrieved from "https://tacticsogre.fandom.com/wiki/Paladin?oldid=5509"
Community content is available under CC-BY-SA unless otherwise noted.