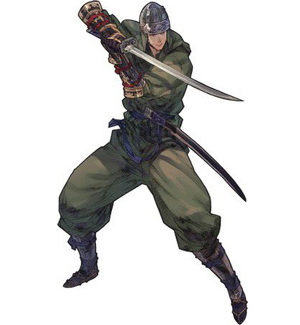 "A nimble warrior who prefers hit-and-run tactics to an open fight. Their attacks with double weapons can be vicious.." 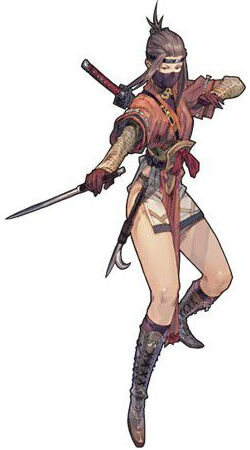 Possibly the strongest generic melee class. 1-handed katana are usually strong, so the ability to attack with 2 weapons at once is powerful. They move fast, scale elevation with ease due to increased climbing ability, and have powerful Ninjutsu for ranged damage and debuffing. The damage spells are like weaker versions of the summon spells, requiring only some components to cast and no MP requirement, but can require a little raising of the Magic stat to use successfully. Their 'Steelstance' ability reduces damage by 50%, and can be worth a skill slot, to increase their survivability on the frontline as a Ninja's base defences are mediocre.

Can be Used by: Humans only

How to Unlock: Ninja Class marks are obtained by:

Retrieved from "https://tacticsogre.fandom.com/wiki/Ninja?oldid=7019"
Community content is available under CC-BY-SA unless otherwise noted.