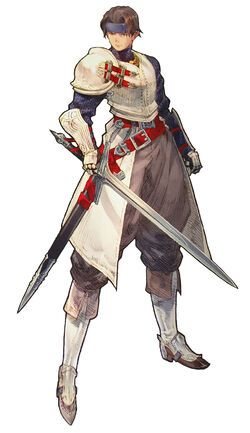 "Title given by the Order of Philaha to those deemed worthy of carrying the mantle of Valerian rule. Their power is largely a factor of their past achievements."

The most flexible class in the game, the Lord is capable of using all support skills, all elemental magic commands plus Draconic, and a variety of action skills such as Mighty Impact, Tremendous Shot, and Phalanx. However, this class doesn't learn much of anything on its own, essentially relying on learning skills from other classes beforehand. Noticeably this class can employ together many different skills that you normally wouldn't see on a heavy fighter, such as Rampart Aura IV, Spell Ward IV, Swiftfoot II, and the ever popular Double Attack. Although base magic power is not high, the Lord is able to cast almost every single spell available.

Can be Used by: Denam Pavel only

How to Unlock: 5 Lord Classmarks are given at Phidoch Castle in Chapter 4 if Catiua Pavel dies during/after the siege of Barnicia Castle.

The Lord is able to equip all abilities in the game except Sanctuary. However, he cannot learn them in this class...

Retrieved from "https://tacticsogre.fandom.com/wiki/Lord?oldid=6706"
Community content is available under CC-BY-SA unless otherwise noted.