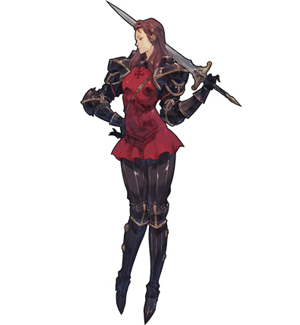 "A high-ranking knight of Lodis. Typically given command of 500 to 2000 troops, the dark knights Loslorien prefer attack in smaller numbers (30 to 100) of highly trained elites."

A precursor to the Lord class, this class can use a variety of weapons and magic. It has good melee skills, such as Double Attack and Mighty Impact. HP Infusion is another skill worth mentioning, but it is better on Rune Fencers/Valkyries, because the Commander is hardy enough that she'll only need it in emergencies. The other skills available are not bad either, but with only 10 skill slots to use, they will need to be carefully chosen. Popular equipment choices include double Daggers or 1-handed Swords, but the single character who uses this class has a unique Whip Finishing Move and can equip Whips in this class.

Can be Used by: Ozma only, however several members of the enemy Dark Knights are also this class.

Retrieved from "https://tacticsogre.fandom.com/wiki/Knight_Commander?oldid=5508"
Community content is available under CC-BY-SA unless otherwise noted.