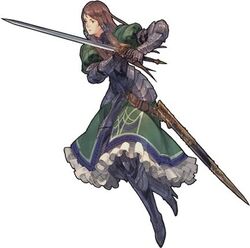 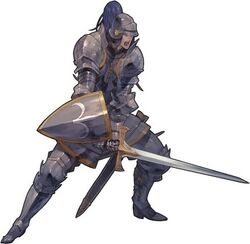 An excellent front-line warrior, able to use healing magic. Nothing stops an enemy advance like a knight in their path. A capable defender and strong attacker.

A hybrid tank-healer class that performs the job of absorbing damage very well. However, since enemies always try to target the weakest unit in reach, they tend not to tank as often as preferred. Phalanx and Rampart Aura are a useful combo, but often fail to protect allies effectively. Using Phalanx almost guarantees the survival of the Knight, but in doing so, directs attention towards your other units, which is the opposite of what you want from a tank. They are a sturdy, but limited support class.

Can be Used by: Human & Skeleton (Note - Undead cannot use any Divine Magic spells in this class).

How to Unlock: Classmarks are sold by general shops from Chapter 2 onward.

Retrieved from "https://tacticsogre.fandom.com/wiki/Knight?oldid=6914"
Community content is available under CC-BY-SA unless otherwise noted.