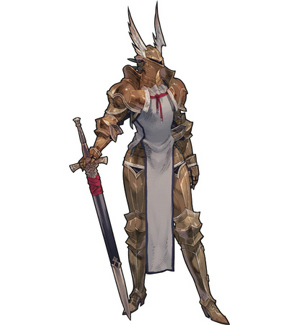 "A warrior with a special talent for slaying beasts and dragons."

Specialized in dispatching Dragon and Beast units, they are a popular alternative to an Archer, because they can use all crossbows, and their slaying skills apply to Finishing Moves and Ranged attacks as well as Physical. The Dragoon has an answer for every tough monster except Golems. The "-bane" versions become available later on, offering the same slayer skills to a group of nearby allies. They will not become more practical than the basic skills until your Dragoon can easily generate the extra TP. Most battles only have a few monsters, but there are monster-heavy ones late-game and in Dungeons like Palace of the Dead and Pirate's Graveyard.

Can be Used by: Humans

How to Unlock: The Dragoon's Classmark is available from the Shop from Chapter 3 onwards but may be dropped by enemy Dragoons in Chapter 2

Retrieved from "https://tacticsogre.fandom.com/wiki/Dragoon?oldid=5511"
Community content is available under CC-BY-SA unless otherwise noted.