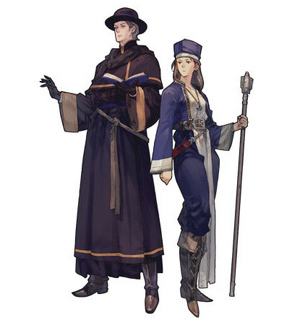 "A wielder of divine magic who mends wounds and cures various ailments. Keep one in every battle."

While healing is less useful in this game, early on you will need a lot of it. Clerics heal best and are similar to a mage when facing Undead since heal spells damage them. They are one of the few classes able to cast Exorcism, making them essential until you have better options. Clerics do not have access to the Meditate skill but can compensate by using a Magic Leaf at the start of a battle. The Expand Mind and Channeling skills serve as an alternative MP supply as well. Later, there are classes and items which offer alternative exorcism methods that render this class completely obsolete, such as the craftable Staff of Purification which has three castings of Exorcism. Many players choose to abandon the Cleric class altogether and get by with casting from Exorcism scrolls instead. However, the Banish scrolls sold from the Palace of the Dead shops are 300 goth cheaper in fact.

Can be Used by: Human & Winged.

Retrieved from "https://tacticsogre.fandom.com/wiki/Cleric?oldid=6993"
Community content is available under CC-BY-SA unless otherwise noted.