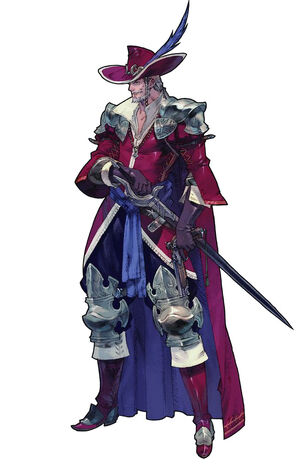 "A pirate plying the Obero Sea, only those unaffiliated with any groups or orders are called by the name buccaneer."

The Buccaneer is a very capable melee class, with some ranged options. One of the better classes, in particular after getting the useful 'Speedstar' skill. This class gets quite a few other skills too, although most of them aren't particularly useful they still serve to help round out this versatile class. The Buccaneer is comparable to the Ranger, enjoying the same movement advantages like Swiftfoot II and swimming, but is arguably superior overall thanks to 'Speedstar'.

Can be Used by: Denam, Vyce, Canopus and Azelstan

How to Unlock: 1 Classmark is given at the end of the sidequest to recruit Azelstan(After recruiting him you have to clean other 2 quest areas in pirate graveyard, the first is by the left route after you recruit him, the other is 'the last' map of pirate graveyard (on holy grounds) and you will get the classmark only if you accept to retrieve the treasure chest. Additional Classmarks can be dropped by Skeleton units in the Pirate's Graveyard.

Retrieved from "https://tacticsogre.fandom.com/wiki/Buccaneer?oldid=6485"
Community content is available under CC-BY-SA unless otherwise noted.