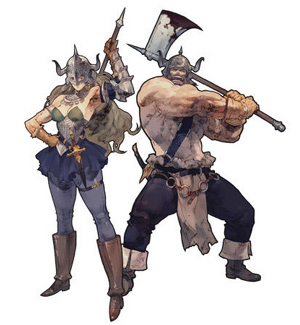 "A melee attacker entirely unconcerned with their own safety, the berserker boasts a strong attack, but weak defense."

This class is even more melee-oriented than the Warrior class, this is reflected by its focus on melee weapons. Its skills are also a bit better than the Warrior's. In practice, they are somewhat slow, but a solid melee choice early on once they have access to Sanguine Assault. They might not be as tough as you'd expect though, so be careful. Defenses will improve late game, so a strong unit in this class is fun to play. They are one of the few classes able to equip the full Dark armor set (Thanatos Armor, Skull Helm & Dagda's Hammer).

Can be Used by: Human, Lizardman & Orc.

How to Unlock: Classmarks are sold by general shops from Chapter 2 onward.

Retrieved from "https://tacticsogre.fandom.com/wiki/Berserker?oldid=6890"
Community content is available under CC-BY-SA unless otherwise noted.