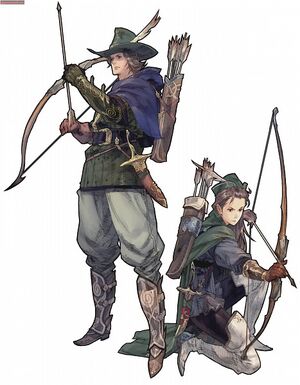 "A mainstay ranged attacker adept with a bow and crossbow. Though their accuracy drops sharply in bad weather."

Archers are similar to the Warrior class, except ranged focused, which makes a considerable difference. Overpowered during the earlier stages of the game, due to the Archer being the only generic class with access to 2-handed Bows. Bows fire arrows in an arc rather than a straight line, allowing Archers to avoid the many obstacles in early urban battles. Later eclipsed by mages and other classes capable of attacking multiple units per turn until they learn Double Shot, enabling them to kill two opponents in a row with clever positioning and targeting.

Can be Used by: Human, Winged, Lamia, Orc & Skeleton.

Retrieved from "https://tacticsogre.fandom.com/wiki/Archer?oldid=6994"
Community content is available under CC-BY-SA unless otherwise noted.